‘A League of Their Own’ series review: Not quite a home run 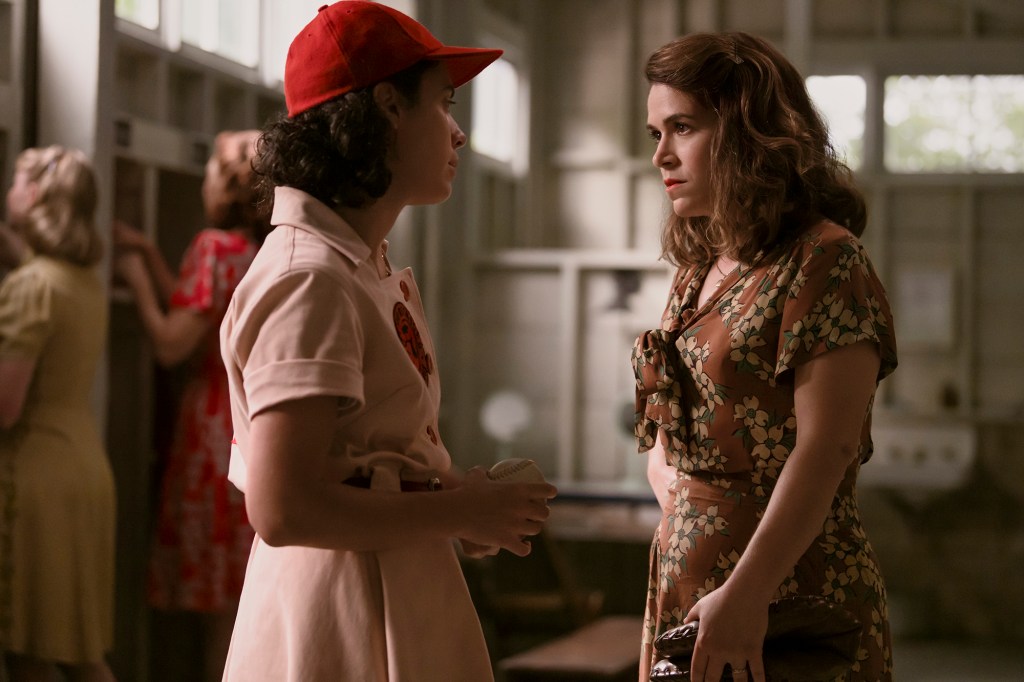 The 1992 movie “A League of Their Own” gets a small-screen adaptation in the Prime Video series of the same name.

The result is entertaining enough and should win over nostalgic fans — but it’s not quite a home run.

Now streaming, “A League of Their Own,” has a similar premise to the movie, which starred Tom Hanks, Geena Davis, Rosie O’Donnell, Madonna, and Jon Lovitz. Created by Will Graham (“Mozart in the Jungle”) and Abbi Jacobson (“Broad City”), who also stars, the series is set in 1943 and follows the Rockford Peaches, a women’s team in the new All American Girls Professional Baseball League, formed because World War II has threatened the existence of Major League Baseball with men off fighting overseas.

The series begins with Carson Shaw (Jacobson) taking a train from Idaho to Chicago for baseball tryouts. On her way, she meets and befriends fellow baseball hopefuls Greta (D’Arcy Carden, “The Good Place”) and Jo (Melanie Field).

There’s no one-to-one translation from the movie. Carson has roughly the same background as Geena Davis’ character – a housewife-turned-catcher with a husband who’s off at war – but she has a different name, no sister and a plot exploring her sexual identity (not in the movie). Nick Offerman has the Tom Hanks role as their coach, but here he’s Dove Porter, not Jimmy Dugan, and he’s not a cynical alcoholic. Many other plot points remain similar, such as dealing with skeptical fans and media, uniforms that aren’t practical (“We can’t play in skirts!” they insist) and some conflicts with each other, even as they’re brought together by the game. Original star Rosie O’Donnell cameos as a bartender.

“A League of Their Own” also takes a deeper dive into race and LGBTQ+ issues than its big-screen predecessor. When two black women, pitcher Max Chapman (Chante Adams) and her best friend Clance Morgan (Gbemisola Ikumelo), show up to tryouts, they’re told to “go on home” specifically because of their race. Meanwhile, Carson’s relationship with Greta soon turns flirty. These elements deepen the story and make the case for why a movie like this can be adapted into a show — it’s got something new to say and mixes in the film’s ingredients.

But these qualities alone, while welcome, can’t make it a winning game. A lot of the pacing has the meandering feel of a particularly drab inning of baseball, while Max’s story is largely isolated from the rest of the plot — which often feels like the show is stalling for time until the stories dovetail.

Much of the dialogue, too, is disconcertingly modern (Carson’s speech is peppered with “like” and “I mean” and phrasing such as, “super-excited!”). While anachronisms work in some shows as a deliberate choice (“Dickinson,” for instance), here it comes across as wishy-washy, as if “A League of Their Own” is unable to decide if it wants to feel like it’s rooted in World War II era or would rather be a modern series that simply has some window-dressings of the era, but otherwise shrugs it off.

For fans of the movie, it’s worth tuning in. And for those looking for a dramedy about women playing baseball in the 1940s that doesn’t gloss over topics such as race and sexuality, it’s an enjoyable enough watch. The ensemble cast is winsome, and the issues they struggle with feel topical. But it’s also jerky and uneven — with the feel of a show that’s clearing its throat and trying to decide on its tone as it unfolds.