Analysis: ‘A League of Their Own’ series remake aims for a home run 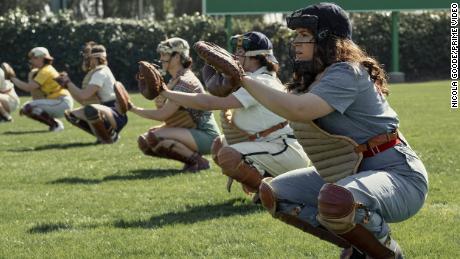 With so much bad news in the ether these days, I’ve been thinking about this a great deal. I was recently reading and listening to some classical music while drinking some chamomile tea, and I felt so very content. I believe we need more of that.

I am torn about remakes.

“No one asked for this,” I often feel like saying. “Why can’t Hollywood be more creative?”

But I’m not mad at the debut of a series based on the hit 1992 film about a World War II-era pro women’s baseball team, because right now celebrating women feels pretty darn good.

“A League of Their Own” is streaming now on Amazon Prime.

In the second season of this reality spin-off, a group of celebrities “undergo an unbelievable drag transformation” to compete and explore new identities, while being mentored by past “Drag Race” queens. No one entertains quite like RuPaul, so I’m all in for this new season because … the shade of it all!

That’s the impression I’ve always had of the late Princess Diana, and the more I learn about her life, the more that is reinforced.

This new HBO Max documentary “draws solely from contemporaneous archival audio and video footage to take audiences back to key events in Diana’s life as they happened,” including her seemingly fairy-tale romance with Prince Charles that ended in a contentious divorce.

Yes, she’s been the subject of films, shows and documentaries before, but there remains so much to unpack with Princess Diana. Her life and legacy can be viewed through a different lens now amid new and more nuanced discussions about the treatment of female celebrities and women in the public eye.

Two things to listen to

When Danger Mouse was a teen growing up in Atlanta, he was a huge fan of the rap group The Roots.

“I remember paying someone to steal (The Roots’ 1995 album) ‘Do You Want More?!!!??!’ from Turtle’s Records And Tapes,” he told NME. “It was one of those albums that most people in my high school didn’t really know about, so I had even more of a connection with it because it was ‘my thing.'”

So imagine his excitement upon releasing “Cheat Codes,” an eagerly awaited collaboration with the group’s longtime MC and rapper, Black Thought.

“‘Cheat Codes’ is the most introspective I’ve been in a long time,” Black Thought said of the album in the same NME interview. “It’s some of my most honest writing.”

Danny Elfman may be best known as the composer for such hits as the theme song for “The Simpsons” and the score for “The Nightmare Before Christmas” (among other collaborations with Tim Burton), but he’s got something new to share. Well, sort of new.

“Bigger. Messier.” is a remix album that follows his 2021 studio release, “Big Mess.”

Elfman’s collaborators on the record include Iggy Pop and Trent Reznor.

“I asked the same thing of every artist: ‘express me through your own eyes,'” American Songwriter reported Elfman saying. “Not only was I surprised at the artists that wanted to participate, but completely blown away by what everyone contributed. … This record became such an enjoyment of experimentation and relinquishing control of my own work in a way that I’ve never done before.”

One thing to talk about

I have been watching a tribute to singer-songwriter Amy Grant by her husband, Vince Gill, over and over.

Grant was injured in a bicycle accident in late July, and during a recent concert Gill had their daughter Corrina perform “When My Amy Prays,” a song he wrote for Grant years ago.

It is one of the most powerful examples of vulnerable songwriting I’ve ever heard from Gill, as he expresses that he didn’t always have the same type of relationship with God that his wife does.

I remember the controversy decades ago when the couple first got together — Grant is one of the most successful Christian artists ever and there were some fans who were not happy about her divorce from her first husband, songwriter Gary Chapman.

Listening to the lyrics of Gill’s tune reminded me that we all have our own path, and that no one is perfect. Great lesson.

Something to sip on

She was always the one that we wanted.

The death of Olivia Newton-John this week at the age of 73 had me running to watch “Grease” and listen to “Physical.”
Newton-John defined the 1970s and 1980s for so many and was a powerhouse of a star.

She also was quite the survivor, having battled cancer multiple times. By sharing her breast cancer journey over the past 30 years, she helped to educate the public, even as she fought to live.

Her race is run now. May she rest well.

What did you like about today’s newsletter? What did we miss? Pop in to poplife@cnn.com and say hello!

Bond producer reveals age of next actor who will play 007