Appalled, devastated and worried. How the world is reacting to the attack on Salman Rushdie 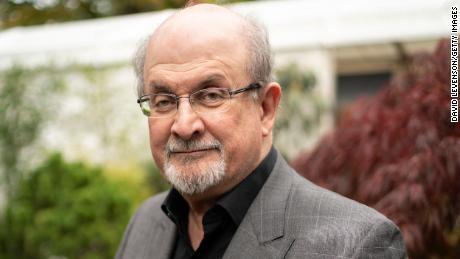 The Indian-born British author, who has received death threats for his 1988 book, “The Satanic Verses,” is on a ventilator after being stabbed at least twice, including once in the liver. He’s expected to lose one eye, according to his agent.

UK Prime Minister Boris Johnson said in a tweet that he was “appalled” by the incident and expressed support for Rushdie’s recovery.

“Appalled that Sir Salman Rushdie has been stabbed while exercising a right we should never cease to defend. Right now my thoughts are with his loved ones. We are all hoping he is okay,” Johnson said Friday.

“[For] 33 years, Salman Rushdie has embodied freedom and the fight against obscurantism. He has just been the victim of a cowardly attack by the forces of hatred and barbarism. His fight is our fight; it is universal. Now more than ever, we stand by his side,” Macron said.

“This senseless violence against a celebrated author is also an assault on global freedom of expression and deserves unequivocal condemnation. May he have a full recovery,” Albanese added.

The 75-year-old novelist — the son of a successful Muslim businessman in India — was educated in England, first at Rugby School and later at the University of Cambridge where he received an MA degree in history.

He later spent a decade under British protection after his fourth novel, “The Satanic Verses,” prompted the supreme leader of Iran Ayatollah Ruhollah Khomeini to issue a religious decree, or fatwa, calling for his death.

The bounty against Rushdie has never been lifted, however in 1998 the Iranian government sought to distance itself from the fatwa by pledging not to seek to carry it out.

And in 2019, Khamenei tweeted that said Khomeini’s fatwa against Rushdie was “solid and irrevocable,” prompting Twitter to place a restriction on his account.

Iranian-born German politician Bijan Djir-Sarai blamed the Iranian government for the attack, saying in a Friday tweet: “The Iranian mullahs’ regime is also responsible for this cowardly attack. Anyone who wants normal relations with this regime should know this.”

The suspect in the attack has been identified as Hadi Matar from Fairview, New Jersey. There has not yet been any official reaction from Iran to the attack.

However, several hardline Iranian newspapers poured praise on Matar on Saturday, including the conservative Kayhan newspaper, whose editor-in-chief is appointed by Khamenei.

“A thousand bravos, a hundred God blesses. His hand must be kissed… Bravo to the warrior and dutiful man who attacked the Apostate and wicked Salman Rushdie. The hand of the warrior must be kissed. He tore the vein of Rushdie’s neck,” the paper said.

Another hardline newspaper, Khorasan, published a headline, “The Devil on the Path to Hell” while showing a picture of Rushdie on a stretcher.

The news has rattled authors from across South Asia and the diaspora, including Bangladeshi author Taslima Nasreen, who said she was “shocked” by the news.

“I never thought it would happen. He has been living in the West, and he has been protected since 1989,” said Nasreen, who is known for her writings on women’s oppression, and who has had some of her books banned in Bangladesh.

“If he is attacked, anyone who is critical of Islam can be attacked. I am worried,” she said.

Aatish Taseer, a British-American writer and journalist who had his Overseas Citizen of India (OCI) card — a form of permanent residency available to people of Indian origin — revoked by Prime Minister Narendra Modi in 2019, said that he was “devastated” by the news.

“Devastated by the news about @SalmanRushdie. He was the first writer I ever met and his determination to defend his freedom (and that of others) in the face of religious extremism has been a constant inspiration. I know he will be ok. He has to be,” Taseer said.

American writers and organizations have also been left reeling from the attack. Rushdie has been living in the United States in recent years.

Press Freedom group PEN America said in a Friday statement that the organization “is reeling from shock and horror” after Friday’s attack.

“We can think of no comparable incident of a public attack on a literary writer on American soil,” said CEO Suzanne Nossel.

“Salman Rushdie has been targeted for his words for decades but has never flinched nor faltered,” Nossel said. “He has devoted tireless energy to assisting others who are vulnerable and menaced.”

Nossel also said that hours before the attack Rushdie had emailed her asking for help in finding safe refuge for “Ukrainian writers in need of safe refuge from the grave perils they face.”

Pope appeals to the young to save the planet, find peace