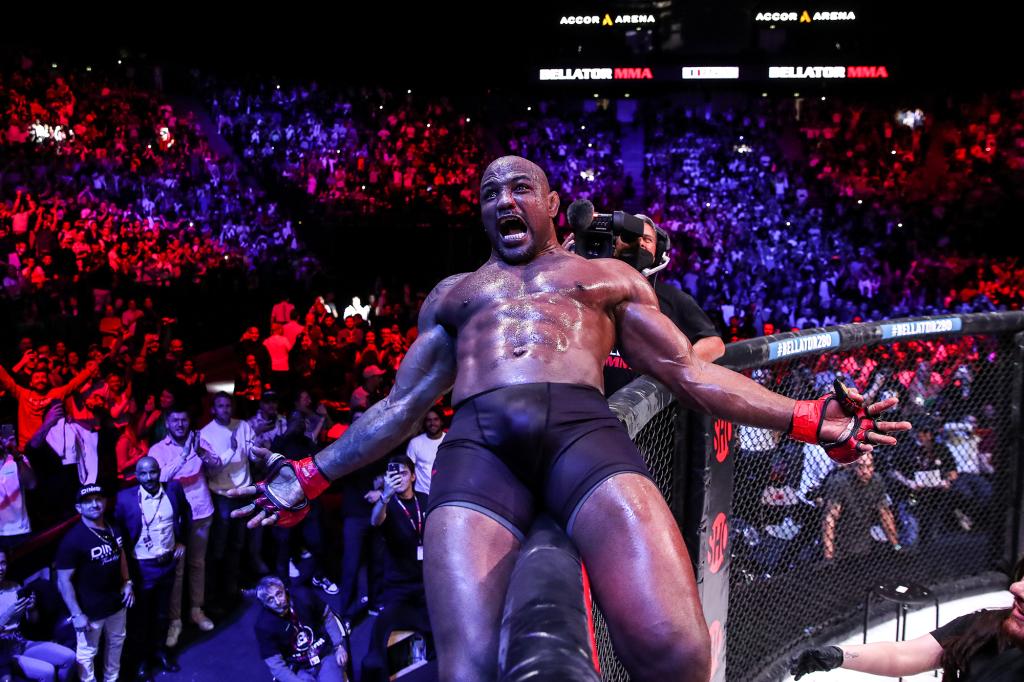 Yoel Romero (14-6, 12 finishes) finally gets his hands on Melvin Manhoef (32-15-1, 29 finishes) in the co-main event of Friday’s Bellator 285 (4 p.m. ET, Showtime) from 3Arena in Dublin, Ireland. Ahead of the bout, which was originally scheduled to take place in May before Manhoef reportedly injured his hand, the Cuba native Romero spoke through an interpreter via Zoom with The Post’s Scott Fontana for a Q&A session in the Post Fight Interview.

Q: You’re coming off yet another third-round finish. Your last seven finishes were in that round. What is it about Round 3 that you have better results ending the fight there instead of the earlier rounds?
A: I just think it’s like a connection between God and I that allows me to do that. That’s what I believe. You know what they say, right? God created everything in six days and rested on the seventh. So, coincidence? I don’t think so (laughs). I’m joking. I’m joking. All kidding aside, there really is no explanation. Just a happy coincidence. That’s one of those things that happens.

Q: That last one against Alex Polizzi was your best performance in a few years. What do you credit for performing so well in that fight?
A: It was really a combination of things. Also a little bit of frustration of not having been able to give everything I could have given to the fans in my fight [last September] against [Phil] Davis with the whole mixup with the rounds and everything that happened during that fight. So it was kind of something that was building up in me, and then it all was flowing out during that fight against Polizzi where everything just came out. I came out on fire trying to give the fans what I couldn’t give them in that previous time. That was factor No. 1. Factor No. 2 is the fact that I’m gaining experience in this sport, in MMA. I’ve gotten, what, 20 fights already, and that’s experience. That’s something that’s very useful, and that allows me to channel everything that I’ve been learning into the success I’ve been having and continue hoping to have going forward.

Q: Your last two fights were at 205 pounds. This next one against Melvin Manhoef is too. How does it feel either similar or different competing at this weight than at 185, where you made your name in the UFC?
A: The sheer brute force is the difference. Don’t mistake it with the power of the punches. That’s not what I’m talking about. I’m talking about the sheer power of the collision, let’s say, when both bodies collide against the fence in the octagon, and the sheer force of that impact, that’s the biggest difference where, those 20 pounds, you can feel them when two bodies collide. It’s kind of like two trains going at each other. We’ve been working a lot on what I call standstill force. Standstill force is when you’re pinned up against the fence, for example, or when you’re kind of jammed up, that’s where we have put an emphasis, where that kind of standstill power can allow you to get out of certain situations with this added weight.

Q: You were supposed to fight Manhoef that last time. How important was it to you for it to be rescheduled here?
A: Look, nothing personal against Melvin here, but I could care less who I fight because the goal is to beat everybody that gets in my way, keeps passing obstacles and moving up in the rankings. That’s all I care about. If it’s Melvin or whoever else that gets in my way, my duty is to get past them and go on to bigger and better things.

Q: What are some of those bigger and better things you’re chasing? What are your goals in Bellator?
A: To be a champion in two divisions: in the middleweight division and the light heavyweight division. Simple as that.

Q: So you’re not giving up on 185 pounds?
A: No, absolutely [not]. I left it very clear with Bellator when I signed with them; they made me feel very welcome, and I was like, “I want to fight in both divisions.” The order of things really doesn’t matter to me, to where like, “OK, 205 is what I have in front of me now. OK, let’s go after it.” And then, when it comes time to be at 185, I go after that, too. Really, I’ll just go after what I have in front of me, and then whenever 185 comes my way, I’ll be ready for that too. It’s thrilling to me, the fact that I get the opportunity to do both things, because the difference in speed, in power, in size, it’s big between 185 and 205. And the fact that I get to show my prowess and my ability in both [is] not something that I take for granted. It’s a privilege, and I aim to do my best in both divisions to show what I’m worth every single time I go out to the [cage].

Q: Bellator has been willing to let its athletes compete in other combat sports. Boxing is one of your strongest assets. Is that of interest to you?
A: Boxing is something that I cherish very much because it’s something that takes roots from my childhood. My family has a boxing history, so I would love to do that someday. And you heard the name right. Jake Paul; what happened there was that, when Jake Paul was gonna fight Tyron Woodley, before he went to Woodley, he came to me, and there were some kind of approaches to make that fight happen. But then, in the end, he backed off. I don’t know; maybe he was scared, but he didn’t want to find me after all. That didn’t happen. So I just continue doing my thing. I don’t know what Jake Paul was or wasn’t thinking. But like I said before, I would love to venture into boxing because it’s something that’s a part of me as well.

Analysis | What to know from NFL Week 4: Bills win close, but John Harbaugh was right

How the new NBA app could change the sports distribution game