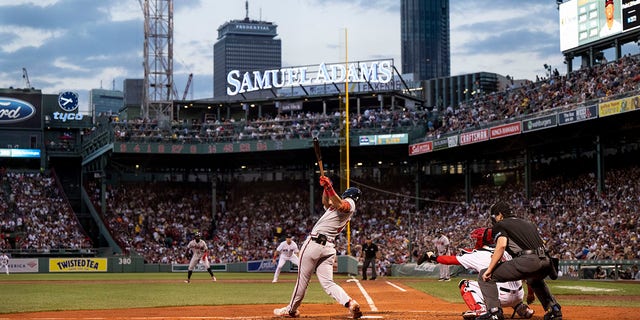 For Atlanta Braves top prospect Vaughn Grissom, the “welcome to the big leagues” moment could not have been any sweeter.

Grissom, who was called up by the Braves on Wednesday from Double-A Mississippi, launched a home run over the Green Monster at Fenway Park for his first career Major League hit, adding a single and a stolen base in Atlanta’s 8-4 win.

Vaughn Grissom, #18 of the Atlanta Braves, bats during the third inning of a game against the Boston Red Sox on August 10, 2022 at Fenway Park in Boston. It was his Major League Baseball debut game.
(Photo by Billie Weiss/Boston Red Sox/Getty Images)

“That was like a ‘We made it’ moment, I guess,” Grissom said after the game. “Like a ‘We did it’ type of feeling.”

MLB AT FIELD OF DREAMS: EVERYTHING TO KNOW ABOUT THE 2022 GAME BETWEEN THE CUBS, REDS

After going hitless in his first two at-bats, Grissom hammered the first pitch he saw in the seventh inning, flipping his bat as he watched his first hit land on Lansdowne Street outside of Fenway Park.

Grissom is the first Braves player to homer in his major league debut since Austin Riley in 2019 and just the 13th overall to accomplish the feat, according to The Atlanta Journal-Constitution.

“I just took a second to myself (before the game) to just really look at everything, and just do my best to just take a picture in my head,” said Grissom, who went back on the field with his family after the game. “You really don’t know until you actually do it. I mean, you try to prepare yourself and all that, but it’s nothing like how you think it’s going to be.”

Vaughn Grissom, #18 of the Atlanta Braves, plays defense during the first inning of a game against the Boston Red Sox on August 10, 2022 at Fenway Park in Boston. It was his Major League Baseball debut game.
(Photo by Billie Weiss/Boston Red Sox/Getty Images)

For Atlanta, Wednesday’s win completed the sweep of the two-game series in Boston, which was badly needed after losing four of five against the first-place New York Mets.

“We had a rough weekend,” Braves manager Brian Snitker said. “Which is fine; it’s going to happen. I did not think this was going to be bump free.”

Vaughn Grissom, #18 of the Atlanta Braves, reacts after hitting a two-run home run against the Boston Red Sox during the seventh inning at Fenway Park on August 10, 2022 in Boston.
(Photo by Brian Fluharty/Getty Images)

Grissom, a shortstop in the minor leagues, was selected by the Braves in the 11th round of the 2019 MLB Draft. He batted ninth and played second base on Wednesday night.

The Associated Press contributed to this report

Joe Morgan is a Sports Reporter for Fox News.