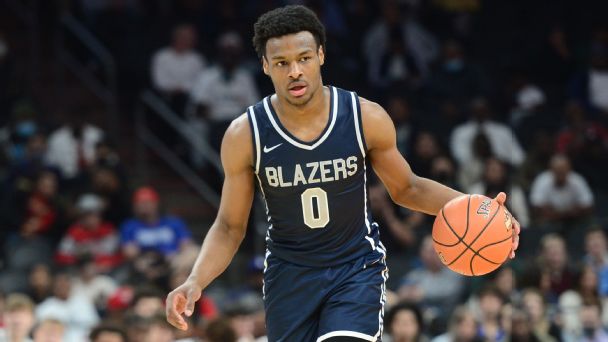 Bronny James and his younger brother, Bryce, are the sons of LeBron James. Ashton Hardaway, Bronny’s teammate at Sierra Canyon (California) High School, is the son of Memphis head coach and four-time NBA All-Star Penny Hardaway. And Justin Pippen, another Sierra Canyon player, is the son of Naismith Hall of Famer Scottie Pippen (as well as the brother of Lakers rookie Scotty Jr.).

The team is heading to Europe for three games over a 12-day span, facing teams from London, Paris and Rome.

Over the next week, we will break down how the team played, what we learned from each game and provide analysis and scouting reports on key players, including Bronny, who is currently the No. 39-ranked recruit overall in the 2023 ESPN 100.

What to watch for

It seems just a short time ago, James was the new kid on the block as a freshman at Sierra Canyon, playing with the likes of Brandon Boston Jr., Ziaire Williams and Amari Bailey. Now, he is the elder statesman and leader of the team.

Saquon Barkley on seeing Giants legends make Ring of Honor: ‘Those are things you want to achieve’