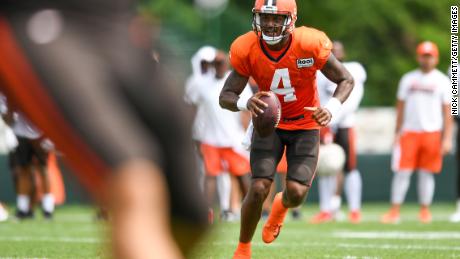 Watson, as well as many other of the team’s starters, will play against the Jacksonville Jaguars, the Browns announced on Wednesday.

In a statement, the team said: “QB Deshaun Watson is scheduled to start the game at QB. The three-time Pro Bowler is set to make his Browns preseason debut after he was acquired in a trade with the Texans in March.”
Watson is currently facing a six-game regular season suspension for violating the NFL’s personal conduct policy in private meetings with massage therapists while he was with the Houston Texans.

However, the six-game ban was well below the full-season suspension the NFL was seeking, and as a result is being appealed by the league.
Speaking on Tuesday at an owners meeting in Minneapolis, NFL Commissioner Roger Goodell called Watson’s behavior “egregious” and “predatory.”

When asked why the league continues to seek a harsher punishment for Watson, Goodell said: “Because we’ve seen the evidence. (Robinson) was very clear about the evidence, she reinforced the evidence that there was multiple violations here and they were egregious and it was predatory behavior.”

“Those are things that we always felt were really important for us to address in a way that’s responsible,” Goodell continued.

According to the collective bargaining agreement signed in 2020, Harvey’s ruling “will be binding upon the player(s), Club(s), and parties’ to the CBA.”

Watson has repeatedly denied the accusations.

“I’ve never assaulted, I never disrespected, and I never harassed any woman in my life,” Watson has said. “I don’t have any regrets.”

A three-time Pro Bowler, Watson did not play last season with the Texans because of a trade demand as well as the investigations into these allegations.

Earlier this year, the Browns traded three first-round picks for Watson and then signed him to a five-year, fully guaranteed $230 million contract, the most guaranteed money in NFL history.

Analysis | The Cardinals doubled down on the Kliff and Kyler Show. It isn’t working.