Drought could cause price rises and shortages into next year, farmers warn 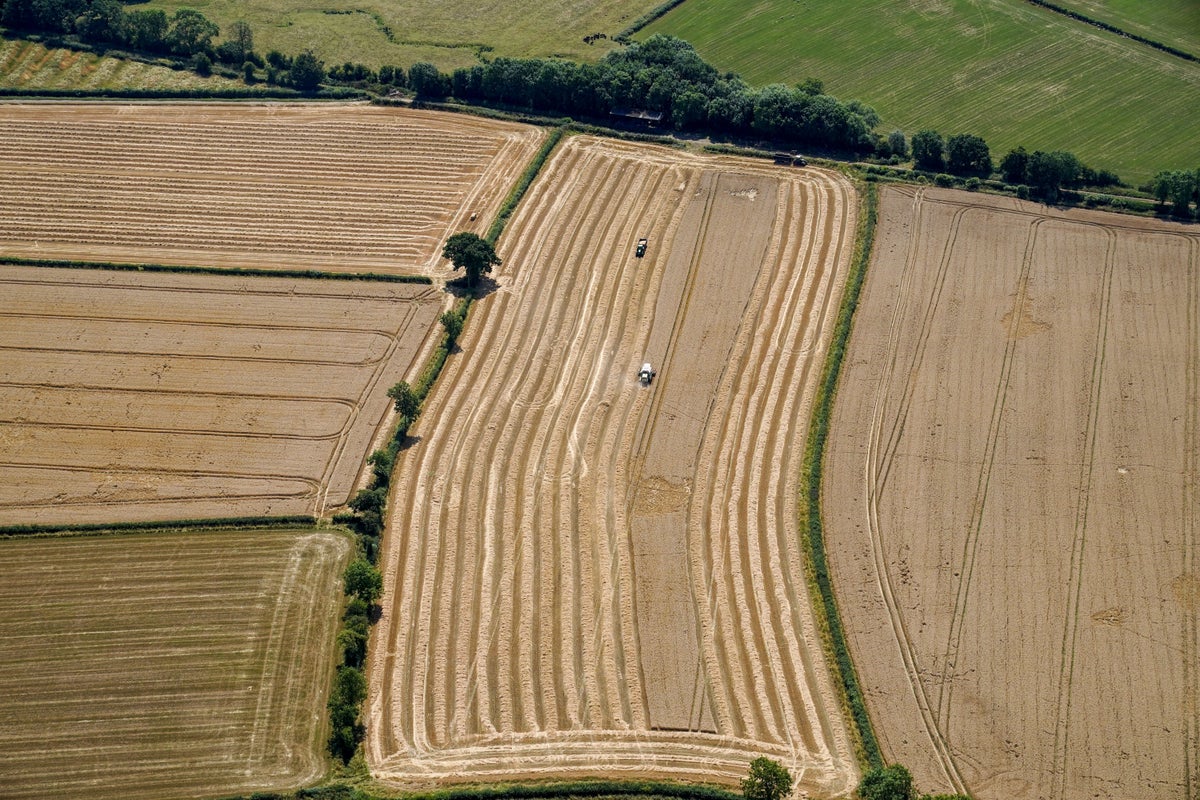 Drought will have long-lasting effects that threaten to hit UK harvests next year, pushing up prices of beef, lamb, wheat and other crops, and putting the nation’s food security at risk, farmers have warned.

Soaring temperatures and the driest July since 1935 have forced growers to hold back on planting because the ground is simply too hard, while others are considering whether it is worth sowing seeds at all this year.

Farmers face the risk of big losses next year if prices for energy and fertiliser remain at record-high levels. They are also struggling with a severe shortage of workers which means they may not have the labour they need when the time comes to pick their crops.

Adding to that catalogue of problems, the government officially declared a drought in the southwest, southern, central and eastern parts of England on Friday amid the ongoing heatwave. Water companies have enacted their drought plans, including hosepipe bans and fines for people who break them.

The extreme conditions have led many livestock farmers to cut back their herds after being hit with massive bills for buying feed at inflated prices to make up for a lack of grass.

Supplies of lamb are likely to be put under further pressure next after sheep farmers warned that ewes would produce fewer offspring because they have been fed on lower-quality hay.

Oilseed rape, a key source of oil that is used in thousands of products on supermarket shelves, would normally be planted from this month but the National Farmers’ Union said most were “not even thinking” about it because conditions are so bad and seeds would not germinate.

Stephen Briggs, a farmer in Cambridgeshire, said a “perfect storm” of factors, including a post-Brexit labour shortage, meant that “at best we will have big food price rises, at worst we will have shortages” unless the government takes urgent action.

His farm, which produces fruit and grains, has had just 110mm of rain this year, compared to an average of 600mm.

“The crop just ran out of steam. We had the earliest harvest we’ve ever had here and it wasn’t because the crop was finished. It just died,” he said.

Yields in dry areas of the fields are down 30 per cent, despite Mr Briggs taking measures to mitigate the impact of climate change, such as planting orchards in between crop fields to provide some heat protection.

“This won’t just be sorted after a week of rain. The effects will run right through to next year,” he said.

“Pretty much all grass south of Sheffield is dead. It takes time for that to replenish. It’s so dry that normal activity in the soil has stopped. Earthworms have gone into hibernation.

Mr Briggs, who worked in farming in Africa for a number of years, urged the government to invest in the UK’s water security to lessen the impact of future droughts.

“We are not prepared for climate change in this country,” he added.

“We have systems for running excess water out to sea but we are useless at conserving water. We’ve been used to temperatures that are not too hot, not too cold and regular rain. That is changing and we need to adapt.”

The Labour Party accused the government of “poor planning and neglect” towards the UK’s water system. According to Labour’s estimates, leaky pipes allowed 117 litres of water per household to be wasted every day over the past three years.

David Barton, deputy director of livestock at the NFU, said farmers always face challenges with the weather but the current situation is “very extreme”.

“We need to look at food security, much more than we do. We all take it for granted, but this weather has really put into focus how fragile the whole system is,” he said.

He urged supermarkets to charge more to cover producers’ costs to give them the financial security they need.

“Supermarkets don’t like putting up prices but they will have to do it and pay producers more. Fertiliser is up enormously; feed, wheat and barley costs are up significantly. Retailers must recognise this and prices must go up,” said Mr Barton.

Robin Milton, 61, who farms cattle and sheep with his son on Exmoor, on the border of Devon and Somerset, said that the effects of the dry weather were “starting to hit now”.

“This is pretty unprecedented – I’ve been farming here since 1980, and there are springs that I’ve never seen dry before that are completely dried up,” Mr Milton said.

“Pretty much all the grass is burnt up, and any of the fodder crop that we normally put in for the autumn feed for lambs… has just disappeared, quite honestly. Some of it hasn’t even germinated.”

Mr Milton said his sheep and cattle “seem quite resilient, as long as they’ve got plenty of water and some shade, which is a challenge, they seem to be quite comfortable”.

He added: “But undoubtedly, I suspect we’ll see the impacts later in the year.”