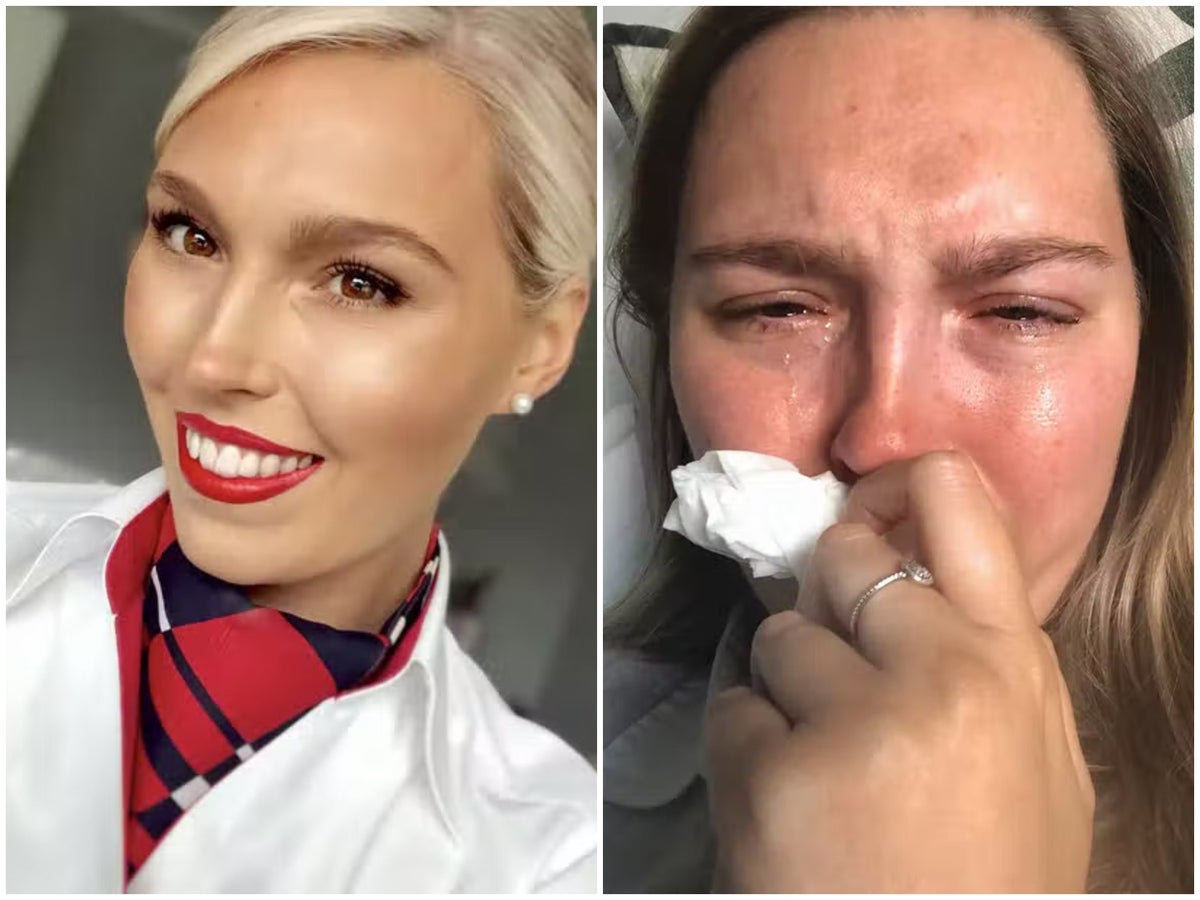 A flight attendant who regularly travelled to cities like Brazil’s Rio de Janeiro and Las Vegas in the US has suffered from long covid so severe that she had to quit her job.

Working as cabin crew on short and long-haul flights from June 2012, Katherine Francis, 29, loved seeing the world and meeting new people in exciting destinations across the globe.

Rarely ill, when she caught Covid in October 2020, she hoped to soon be shot of it, only to become one of the 1.8 million people in the UK believed to be suffering with long Covid, according to the Office for National Statistics – which is when symptoms persist sometimes for months after the initial infection.

Francis quit her job in March 2022 after what she describes as her “worst crash yet”. She lives in Burgess Hill, West Sussex, with her mother, Anne-Marie Francis, and father, Michael Francis, both 63, and said: “I thought at 29 I would be settling down with someone, maybe having children and exploring the world.

“I had dreams of what my life would be and that has been thrown up into the air after catching Covid.”

Still struggling with severe breathing pains, a chronic cough and muscle weakness, among other symptoms, 22 months after her original Covid infection, Francis – who has  even sought hospital care because of her illness – is now determined to get her life back on track.

Reflecting on her cabin crew role – which she returned to in 2019 after three years working in property – and saw her travel to places as diverse as South Korea and Vienna, she said: “I loved everything about the lifestyle.

Little did Francis know that when she touched down at Gatwick Airport in March 2020, it would be the last time she did so as a flight attendant.

At first, she was furloughed, before being made redundant in August 2020, after which she found an internship with a London PR agency – always hoping to one day return to her life in the skies.

But the week she was due to begin her new role in October, she tested positive for Covid, saying: “I had been so careful, barely seeing anyone as things just started to open up and had gone to a garden centre with my friends to sit outside.”

She added: “Two days later, I had the worst headache I had ever experienced and then the next day, I had this heavy pressure on my chest.”

She said: “My temperature became really high and I started coughing and feeling really out of breath.”

She added: “We had to call paramedics out at one point because I was struggling to breathe so much. It felt like someone was sitting on my chest.”

After three weeks of isolation with a high temperature, Francis started to feel better and tried to get stuck into her new job.

She said: “I remember thinking it was a fresh start and I managed to start work and tried to get back on my feet – but I still didn’t feel quite right.”

Slowly, as the weeks went on, Francis said the “warning signs” began to appear that she was not recovering normally, including an internal tremor, fatigue and back pain.

And by January 2021, her dry, “barking” cough had returned with a vengeance.

“My breathing started getting really bad until one night I woke up at 2am, could barely breathe and ended up getting rushed to hospital,” she said.

After being treated, Francis was sent home – but the symptoms kept returning.

She said: “By March, my cough had become really angry and my heart rate was really fast. If I tried to climb the stairs, it would leap up and I had constant heart palpitations.”

Francis added: “I didn’t know what to do with myself, I was so drained and confused.

“I often felt like I was dismissed by medical professionals because I was young and told that I would be fine.”

By May 2021, Francis was diagnosed with arrythmia – an abnormal heart rhythm – as well as starting to suffer from panic attacks as a result of her increasing breathlessness.

She said: “I ended up taking two months off work, but every time I tried to return, I had to leave again. I was just getting sicker and sicker.”

She said: “My breathing was so bad, I would just have to lie in bed.”

She added: “I wasn’t living anymore, I was just existing. I couldn’t go out because I was in pain and even with the vaccines, I was terrified of catching the virus again – knowing what it had done to me the first time.”

Constantly off work sick, Francis quit in March 2022, when she experienced the “worst crash” yet with what she has now had diagnosed as long Covid.

She said: “My legs started to become really weak, so physically weak that I couldn’t walk.

“My left leg started to feel like a dead weight, but then it moved to my right leg too – which was probably the most terrifying symptom. It was debilitating.

“I was in bed all day, every day. Even taking a shower, my mum would have to sit outside in case I fell over.”

Prescribed anti-histamines in June this year, on top of taking beta-blockers and using an inhaler, she also learned about fatigue management which, amongst other things, involves taking three to four 20-minute naps every day

Also taking a host of supplements such as iron, B12, folic acid and vitamin D, Francis noticed an improvement.

She said: “I was working really hard on my walking and taking steroid inhalers that helped my cough. I thought, maybe this was the beginning of recovery.”

Francis added: “But then I crashed back down to square one and it was debilitating.”

Last week, Francis managed to muster the energy to go to her best friend’s wedding – but not without consequences.

She said: “I was determined to go because I have missed out on everything else.”

She continued: “I got myself a walking stick and managed to get through it – but it left me recovering in bed for three days.”

With no real treatment yet available for long Covid, Francis, who is single, feels concerned about the future.

She said: “I never thought I would be in this situation. I am 29 and I cannot even fathom trying to date like this.”

She added: “I thought I would be settling down and doing more – but this is so unpredictable.  I never know what I will be like from one day to the next.”

Francis is now harnessing the energy she does have to spread awareness about long Covid and push for more help for sufferers.

She said: “People like me deserve to get our lives back. We shouldn’t be an afterthought. We are young professionals who could be contributing to the economy and living our lives and we can’t.

“We need to be talking about this and doing something about it.”

Katherine is helping participate in an app launched by Imperial College London and Vodafone Foundation’s DreamLab free app, which uses crowdsourced research to help find a solution to beat the long-lasting symptoms of long Covid. Download DreamLab for free now in the App Store for iOS or Play Store for Android.