Former NFL star punter Marquette King back with the XFL: ‘I’m all IN!’ 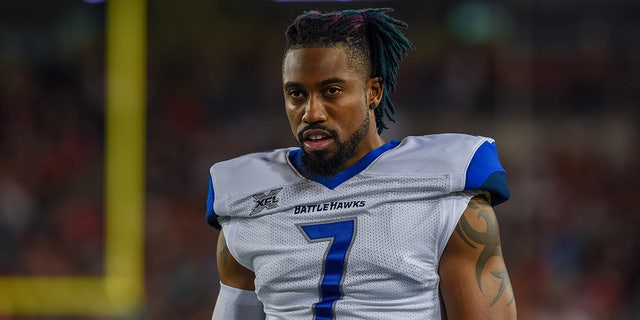 Marquette King, who was once considered one of the best punters in the NFL during his career, found a home with the new XFL.

King announced Tuesday he signed with the XFL, becoming one of the first highly talented players to join Dwayne “The Rock” Johnson and Dany Garcia’s football league.

St. Louis Battlehawks punter Marquette King, #7, awaits his next punt as he walks near the sideline during the football game between the St. Louis Battlehawks and Houston Roughnecks at TDECU Stadium February 16, 2020 in Houston.
(Ken Murray/Icon Sportswire via Getty Images)

The former Second-Team All-Pro special teams star posted a clip of the letter he received from XFL president Russ Brandon, which thanked him for accepting the invitation to the XFL Draft Player Pool.

“Had to make sure I was in the right state of mind before I committed to this. I’m all IN!” he wrote on Twitter.

St. Louis Battlehawks punter Marquette King, #7, before a XFL game between the DC Defenders and the St. Louis BattleHawks, on March 8, 2020, at Audi Field, in Washington, DC.
(Tony Quinn/Icon Sportswire via Getty Images)

He joined the Denver Broncos in April 2018 but was waived and cut after four games.

Punter Marquette King, #7 of the Oakland Raiders, sends the ball for 68 yards against the Buffalo Bills late in the fourth quarter on December 4, 2016 at Oakland-Alameda County Coliseum in Oakland, California.
(Brian Bahr/Getty Images)

In 2020, King played for the St. Louis BattleHawks in the rebooted XFL and led the league in punting yards (868). However, the league ceased operating as the coronavirus pandemic gripped the world.

Ryan Gaydos is the sports editor for Fox News and Fox Business. Story tips can be sent to Ryan.Gaydos@fox.com.