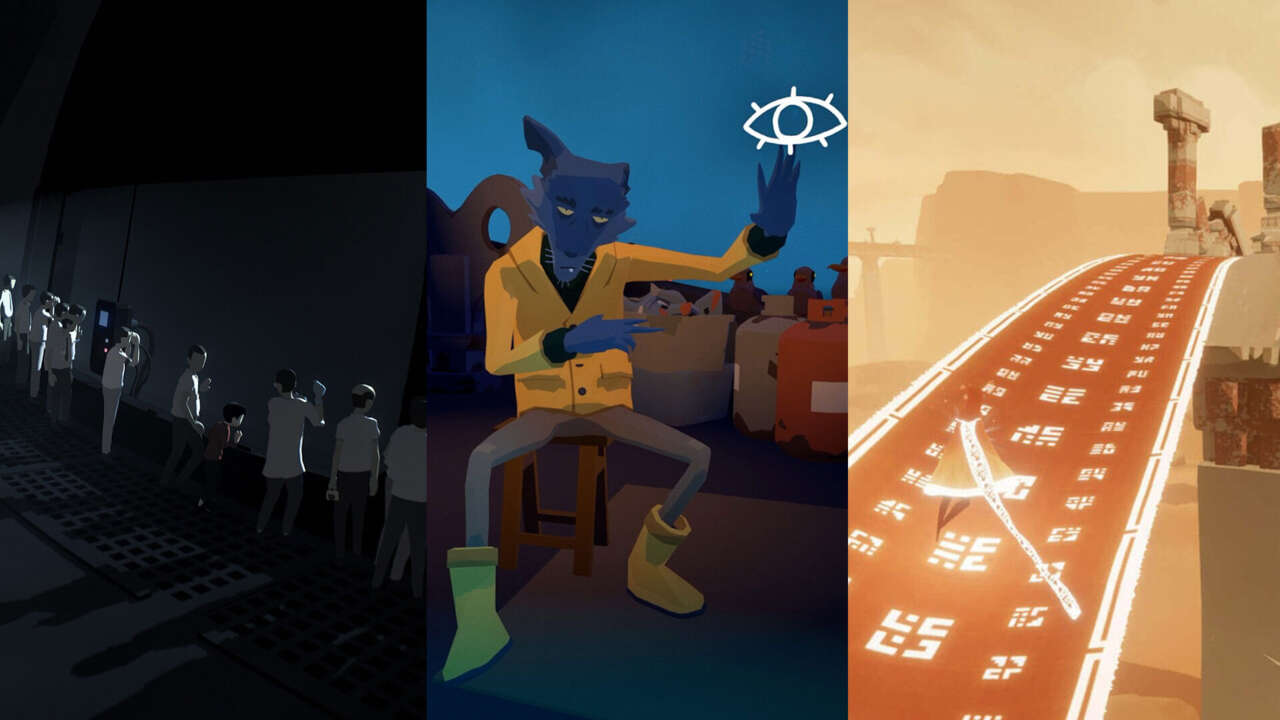 Before Your Eyes is a game about blinking as life flashes, well, before your eyes. You witness a collection of moments from the life of a talented artist, with a few twists along the way, but one of its most effective mechanics comes from outside that core blinking mechanic.

Want us to remember this setting for all your devices?

Please use a html5 video capable browser to watch videos.

This video has an invalid file format.

Please enter your date of birth to view this video

By clicking ‘enter’, you agree to GameSpot’s

This is a spoiler for a specific mechanic in Before Your Eyes, so tread lightly, but one of the most effective late-game moments during the extended conclusion of the game are a handful of sequences where you must hold your eyes closed and just listen. The change in gameplay is incredibly effective and forces you to focus wholly on the narrative in a new way. We recently spoke with game director Oliver Lewin and creative director Graham Parkes about brining Before Your Eyes to mobile devices, care of Netflix, and during that conversation we dove deeper into that specific mechanic, how it came about, and why it’s a high compliment to be told something you made is sad.

The mechanic where you close your eyes for extended periods of time and just listen–how did that come about?

Lewin: We developed the game over quite a long span of time and I remember very early on Graham [Parkes] had the idea of just holding your eyes closed to have this glimpse into another reality or hearing someone’s voice or something. But it was one of those features that we really struggled to find the right place for in the game.

So, it was rather late in the development cycle that we thought, “Oh, in that kind of third act there’s a good place for it.” We wanted to really change the pacing of the game so that it wasn’t about time rushing over you like a waterfall in a way that you can’t control. But it was actually about trying to peer deeper into a repressed memory and embrace the stillness of that in a very focused way and there’s a sequence of the game where you’re largely in a bedroom and you’re restricted in that way.

Through holding your eyes closed, you’re able to peer into other places, and other people and other memories. It’s sort of this freeing thing that really flips the pacing of the game upside down. We found that correct moment in the game to introduce this feature and that was one of the last new features that got added into the game.

Parkes: It was always something that we just knew we wanted to do because it’s so cool. I think as a storyteller the idea that closing your eyes puts you into this very vulnerable state and a very kind of… We close our eyes to pray. We close our eyes when we’re listening to music. We close our eyes in these more exalted moments.

I think the idea that I can actually make a player do that? It’s sort of this amazing way to push them deeper into themselves and force them to enter that introspective place. It just always felt like we have to find a place for that, that’s so cool and magical. As Oliver said, it took a while to find the right version of it.

I think we were also inspired by games like Journey and Inside. In Journey you’re always struggling with how much you can fly and then you’re always flying a little bit and then your cape runs out and you fall. Then you have that section just before the last chapter where you can’t fly at all and then suddenly in that last chapter, they just give you infinite flying ability and it totally puts the whole mechanic on its head and lets you free.

Inside does a similar thing. The whole game you’re having to run away from bad guys and you’re totally vulnerable. Then at the end, you suddenly–through the crazy transformation–you suddenly have insane power and instead of being afraid of everybody else, everyone’s afraid of you.

And you’re also afraid of you.

Parkes: Yeah, exactly. That game’s amazing. I think that’s such a great thing that narrative games can do is sort of invert their own mechanics especially when that’s lined up with the story goal. It felt like this really perfect inversion because when you’ve spent a whole game being out of control. You’re holding your eyes open and trying not to blink, but then when you blink, it’s totally out of your control. You’ll just blink accidentally versus when you hold your eyes closed, it’s totally up to you when you want to open them. So, suddenly we’re kind of giving you autonomy for the first time after we’ve taken that away for so long.

We had iterations where we used it earlier in the game and we realized, “Oh no, we have to take all those out and save it,” because it’s going to be so much more powerful if it comes at the end of an hour spent trying to hold your eyes open.

Why, from a creator’s perspective, is it a compliment for me to say, “Your game made me cry.” Why does that make you proud?

Parkes: Well, I think we’ve seen that it’s really cathartic. I think that’s what drama is meant to do. It’s meant to be this space where you can go and experience hard emotions in a safe space. For us, I love art that makes me cry and that makes me emotional and brings me to that place.

Also, as people that love this medium of games so much but always felt like they could be so much more. We were also big film buffs and to us film kids it was always like, “Why aren’t games trying harder to get those really intense reactions out of people that films, books, and music do?” It felt like that was such a rare thing to see. I think when we went to college, that started happening more. You started seeing games like Gone Home, suddenly the kind of indie moment started to really happen.

But I think we still have a sense of that, too. Of just like, we want to see what we can do with the medium that other people aren’t doing and that can just push it further because we think that it has that possibility. I think it has the potential to be the most emotionally intense artistic medium because it’s all mediums at once plus this thing of player agency, which is this totally crazy secret sauce. I think that for us, too, it is about also a love for the medium and saying, “Let’s see if we can do something different with it.”

You can read GameSpot’s Before Your Eyes review by following the link.

GameSpot may get a commission from retail offers.

Free Fire Tales’ Next Episode Double Trouble Is Out Now