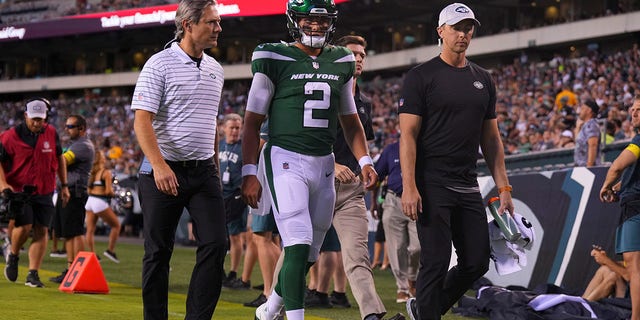 New York Jets quarterback Zach Wilson has reportedly avoided a serious injury, with an MRI finding that the second-year quarterback has a bone bruise and meniscus tear, according to the New York Post.

Wilson is expected to undergo arthroscopic surgery and will miss 2-4 weeks.

Zach Wilson (2) of the New York Jets walks to the locker room after injuring a knee against the Philadelphia Eagles in the first half of a game at Lincoln Financial Field Aug. 12, 2022, in Philadelphia.
(Mitchell Leff/Getty Images)

Wilson, drafted by the Jets with the second overall pick of the 2021 NFL Draft, exited New York’s first preseason game after injuring his right knee while trying to cut upfield on a first-quarter scramble.

“Just run your butt out of bounds,” Jets head coach Robert Saleh said after the game. “He got a little greedy, he wanted to get more. It’s a new sod, so the turf wasn’t exactly as firm as you want it to be.”

Speculation after New York’s 24-21 win over the Philadelphia Eagles was rampant, with many wondering whether Wilson tore an ACL. Saleh told reporters after the game Wilson’s ACL was “supposed to be intact.”

Wilson’s meniscus will require a trim and not a full repair, according to reports. It’s a major sigh of relief for the Jets, who recently lost first-round draft pick Mekhi Becton, who is likely out for the season after fracturing his knee cap.

Zach Wilson of the New York Jets during a preseason game against the Philadelphia Eagles at Lincoln Financial Field Aug. 12, 2022, in Philadelphia. The Jets defeated the Eagles 24-21.
(Mitchell Leff/Getty Images)

The Jets are expecting a big second season from Wilson, especially after bolstering the offense with additional talent.

New York drafted three offensive players in the first three rounds of the 2022 NFL Draft, selecting wide receiver Garrett Wilson out of Ohio State with the 10th pick of the first round.

Backup quarterback Joe Flacco is expected to take over as starting quarterback with Mike White as his backup. Flacco appeared in two games for the Jets last season, throwing for 338 yards, three touchdowns and no interceptions.

Joe Morgan is a Sports Reporter for Fox News.