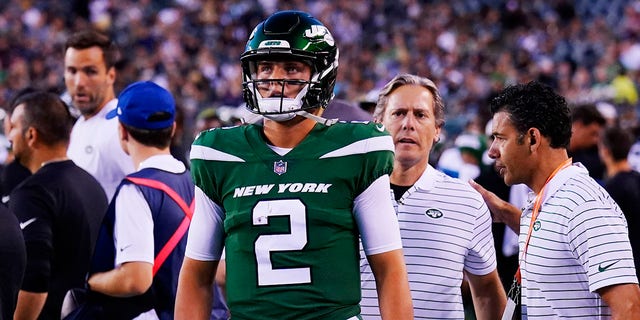 After revamping their roster in free agency and the NFL Draft this offseason, the New York Jets are once again in trouble.

Quarterback Zach Wilson, who was expected to take a big step forward given the team’s investments on offense, went down with a non-contact injury in the Jets’ preseason game in Philadelphia against the Eagles.

The New York Jets’ Zach Wilson walks the sidelines after he was taken off the field after being injured during the first half of a preseason game against the Philadelphia Eagles Friday, Aug. 12, 2022, in Philadelphia.
(AP Photo/Matt Rourke)

Wilson took a snap under center, scrambled right and took off running.

When he cut left toward the middle of the field, his right leg seemed to buckle, and he dove to the turf.

Wilson injured his right knee last year and missed four games. This injury’s severity is unknown, but he will undergo an MRI on Saturday, head coach Robert Saleh told reporters after the game.

Saleh did add that initial testing indicated his ACL was intact, but they won’t know for sure until after an MRI.

“He’s in good spirits. He’s fine. He’s as good as you can be in this situation,” Saleh added, via The Athletic.

He did walk off the field on his own but was replaced by Mike White.

Zach Wilson of the New York Jets warms up prior to a game against the Buffalo Bills at Highmark Stadium Jan. 9, 2022, in Orchard Park, N.Y.
(Timothy T Ludwig/Getty Images)

Wilson struggled last year, throwing just nine touchdowns with 11 interceptions. He completed just 55.6% of his passes for 2,334 yards. But the Jets selected wide receiver Garrett Wilson with the 10th pick and drafted running back Breece Hall with the 36th.

They also signed offensive linemen Laken Tomlinson and Duane Brown, who’s replacing Mekhi Becton. Becton is out for the year with a knee injury of his own.

The Jets ruled him questionable to return, but as backups continued to enter the game, he never was going to come back.

Wilson was the second pick of the 2021 NFL Draft.