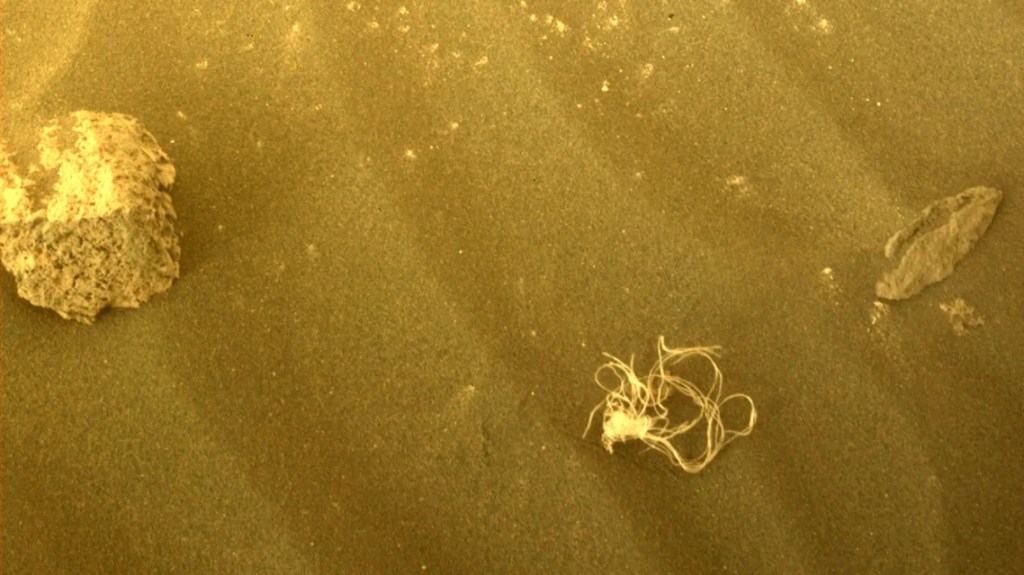 NASA’s Jet Propulsion Laboratory (JPL) says that a viral image of a clump of stringy material photographed on the surface of Mars is likely Dacron netting.

The material is also used in thermal blankets, according to an agency blog post.

However, before the string could be imaged by the higher-resolution Mastcam-Z cameras, it was blown away by the wind.

“The hardware teams suspect that this is another piece of Dacron netting, based on the observed 2×2 mm2 grid mesh pattern,” said Justin Maki, JPL’s imaging scientist and Mastcam-Z deputy principal investigator. “They noted that this particular piece of netting appears to have undergone significant unraveling/shredding, suggesting that it was subjected to strong forces.”

Additional images of Entry, Descent, and Landing (EDL) system debris from NASA’s Perseverance rover in the Hogwallow Flatts region were shared, including a piece of multi-layer insulation that was likely from the skycrane.

The skycrane crash site is located two kilometers (1.2 miles) to the southeast.

Maki said that it appears the material was blown by the wind over the course of several days or weeks.

“The dot pattern on the material matched the pattern of the thermal blankets installed onto the spacecraft. The blankets were made in one of two varieties: Perforated Aluminized Kapton or Mylar – the bright material was likely one of these two materials.  Subsequent images of the blanket showed that it was snagged on a rock and could be seen flapping in the breeze,” he explained.

As of July 24, the NASA operations team has cataloged around half a dozen pieces of suspected EDL debris in the area.

Maki noted the first EDL debris was spotted in Hogwallow Flats on April 16. JPL said it appears to be a “natural collecting point for windblown EDL debris.”

While members of the Mars Perseverance rover team are checking to see if the material may pose as a potential contamination source for its sample tubes, no immediate concerns have been identified thus far.