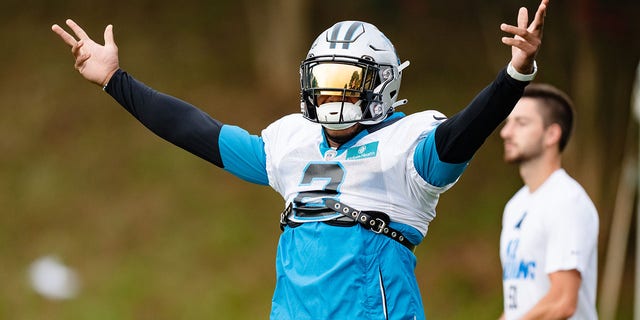 Had it not been for one of the team’s stars, things may have gotten ugly.

Seeing the ruckus brew from afar, D.J. Moore decided to take matters into his own hands and play peacemaker.

Two fans started jawing at each other within the first few rows of Bank of America Stadium near the Panthers’ tunnel. The dispute was close enough to the field that Moore was able to take action.

The receiver climbed up the wall and stood on the railing in front of the seats. It’s unclear what started the argument or what was said. But it was clear Moore was trying to resolve the situation.

As Moore calmed the fans down, he gained support from nearby bystanders, and he walked away seemingly without any damage done in the seats.

And a fight like a recent one at a Padres-Giants baseball game was averted.

D.J. Moore of the Carolina Panthers celebrates a catch for a first down during the second quarter against the Minnesota Vikings at Bank of America Stadium Oct. 17, 2021, in Charlotte, N.C.
(Mike Comer/Getty Images)

Moore is gearing up for the 2022 season looking to replicate a year in which he caught 91 passes for 1,157 yards and four touchdowns. He’s entering the first year of a three-year contract worth over $61 million.

Not only did the Panthers lock up a star wideout, they apparently got some extra security.