Polyamory is everywhere – so when will UK law catch up? 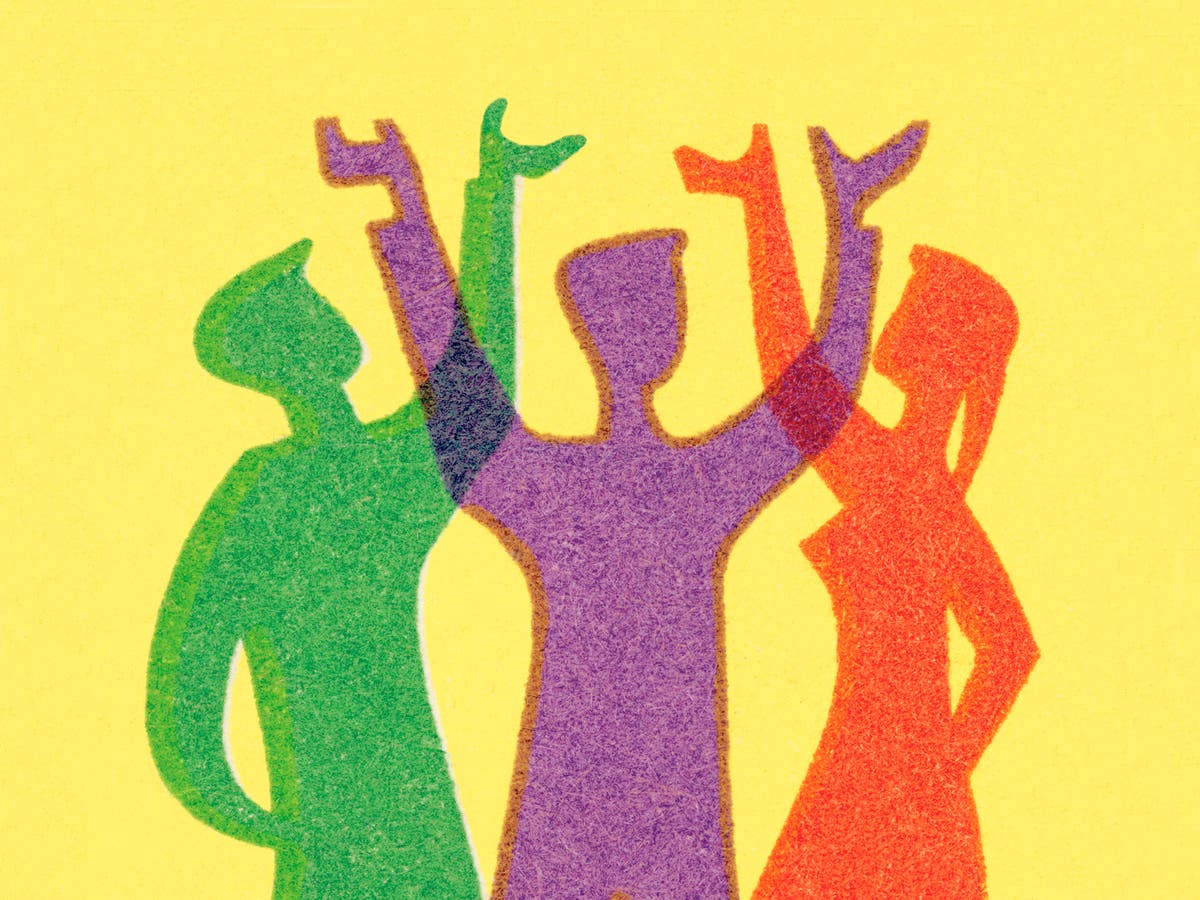 I get asked a lot of questions about being polyamorous. How I allocate time. How I navigate conflicting relationship styles. How I get any work done around the presumed bacchanalian nights of group sex and opium dens. But to answer the most popular enquiry: yes, I do sometimes get a little jealous.

Not of my partners, I should clarify. Or indeed any of their partners, all of whom are out here living their best lives, no doubt more concerned about how many jumpers they need to put on this winter to stay warm than finding someone else’s in their laundry basket. What I envy instead are the legal protections and social recognition that is yet to be afforded to set-ups like mine. Or many other domestic scenarios that don’t resemble a 1950s family photograph. Those felt barely realistic back then, and feel even more cruelly anachronistic today.

Nonetheless, to see polyamory or ethical non-monogamy (ENM) as new, shiny relationship models is, for the most part, to view global history back to front. Monogamy is both a relatively new and – perhaps surprisingly – unpopular way of life: not only do less than five per cent of mammal species on the planet practice it (and those animals that do pair for life, like swans, are rarely sexually exclusive to their chosen partners), but the “monogamy” practiced by humans generally involves multiple partners, too. They’re simply spread out over time or sequestered away in the form of secret affairs.

Giulia Smith, founder of the newly formed UK Polyamorous Association (UKPA), believes that polyamorous and ENM communities are sorely lacking in representation, and wants to provide support and advocacy for those people who face discrimination or stigma for their way of life.

“Basically, polyamory isn’t recognised by the law in the UK,” Smith tells me from their living room in Bristol. “A common issue is harassment: polyamorous people can often experience verbal abuse, be accused of immoral or unethical behaviour, or be excluded by their family or workplace.” That can have a ripple effect across all areas of life, including social isolation. It means people can be discouraged from being open about their relationships, which in turn limits polyamorous visibility in society. “The fear of coming out is huge,” Smith adds.

How do we change that stigma? As well as advocating for people currently facing discrimination, Smith also hopes to provide – as part of the UKPA – training and education within key institutions to create a better, more inclusive future. That could include health clinics, domestic abuse shelters and – most crucially – schools, where sex education doesn’t currently acknowledge polyamory. It’s a project that necessitates fighting battles on multiple fronts, though there are urgent priorities.

“We think there are two key policies that need amending,” they say. “The first is family law. Marriage, I think, is a very long way away, in terms of being able to have more than one spouse. The first step is more likely to be civil partnership. But before that, [we need] inclusion in the Equality Act. That would then automatically raise the perception of employment law, property law, healthcare legislation, harassment. It wouldn’t necessarily mean the legislation in those areas would change straight away, but it would be the first step.”

Dr Elisabeth Sheff, an author and expert in polyamory in the US, agrees. “Those two [policies] are the most important,” she tells me over the phone from upstate New York. “Family law would not only cover custody of children, but also sharing of benefits and things like that. In the UK, that’s not as big of a deal, but in the US, where we have enormous gaps in our healthcare insurance, being able to cover multiple spouses under insurance makes an enormous difference to some people.”

As in the UK, employment law technically exists within the US to protect minorities, but Sheff admits it’s “very shaky” at the best of times. That even applies to more commonly acknowledged forms of discrimination. “In theory we have protection around things like race and gender,” she says. “But in practice many places of business are what they call ‘at-will’ employers, which means they don’t need any reason to fire you. They can fire you if they feel like it. Polyamorous folks are among those with insecure employment in the United States.”

It seems all the stranger when you consider that strict monogamy accounts for only about 17 per cent of human cultures. Of course, that’s not to say that the remaining 83 per cent come under the banner of ethical non-monogamy; far from it. Laws do exist in the world regarding multiple partners – polygamy was decriminalised in Utah in 2020, primarily with regard to members of the Church of Jesus Christ of Latter-day Saints, commonly known as Mormons – but the common denominator is patriarchal households where men take multiple wives. These kinds of communities have historically been rife with various forms of abuse.

What makes conservative lawmakers uncomfortable, it seems, is when agency – particularly, but not exclusively, sexual agency – is no longer the exclusive preserve of men. Or as Sheff puts it: “If women can legitimately have multiple-partnership relationships as well, the patriarchy wants nothing to do with that under any circumstances. It’s much easier to slut-shame someone when they don’t have any alternative.”

Part of the problem, Sheff says, is that many of our legal frameworks are still built around the somewhat nebulous concept of morality, rather than ethics. This is particularly pertinent when it comes to child custody law: if a religious judge deems a gay couple to be “immoral”, for example, would we accept that this constitutes an accurate or fair assessment of their ability to raise children? “If we could refocus from morality, which is incredibly subjective and religious, to a more neutral, ethical framework, I think that’s a much better base of laws and decision making.”

While lifestyles involving multiple partners may be nothing new, however, there is a growing sense that some of these changes may reflect an adaptation to pressures faced by younger generations today. Or, to quote a viral tweet from last year, “‘Why is everyone poly these days?’ Motherf***er it takes seven people to be able to buy a house”.

“Millennials and Generation Z are generally not that enchanted with monogamy,” Sheff argues. “A lot of them have two or three jobs, and the idea of also trying to have kids is difficult. So that kind of white picket fence marital dream is really not feasible. You’re not likely to be living in the same place or have the same job in the next five years. So I think it goes generationally with this more rapidly shifting, nomadic society. In a way, it’s a coping mechanism – it’s well suited, it’s adaptive to postmodern society.”

But people aren’t just choosing to be polyamorous out of dire necessity. It’s also worth remembering that, despite misconceptions to the contrary, the term “partner” in ENM circles doesn’t merely equate to sexual partners. For people who identify as asexual, for example, it’s not a priority at all. But for most, I would suggest, it’s more about building something bigger – forging a chosen family (or “logical family”) based on the people you want to share your life with, however much or little of it that may be, and not just the people who arrive in your life by circumstance or birth. In short, it’s about community.

It’s the kind of community that people used to more commonly find in church, or with their neighbours, or the one person they chose to provide all the sex, intimacy and companionship they would need for the rest of their lives. Some of those institutions still hold strong, though many are being questioned or left behind. “But we’re left with that hunger,” Sheff tells me. “For connection, [or] a larger sense of wanting to know who’s close to us. To have a bigger network than just the people we’re having sex with is a deeply human desire, and that is largely unmet in many societies, even by religion.”

People still want to feel part of a congregation. I feel that pull too. I want a life where the people I love can live their lives freely and authentically and with as much joy and sense of connection to the world around them as their hearts can take. After all, the hard work isn’t balancing multiple relationships. The real challenge is to build a world where they’re accepted by everyone else, a world where loving more than one person isn’t seen as a deviant character flaw. That starts with re-examining the antiquated legal framework that still defines our lives.

Crucially, I want a world where the first question I get asked in the pub is the one my dad asked me when I first came out as poly: “Isn’t it expensive going on all those dates?”

It is. But we’re also very good at sharing jumpers and Netflix passwords, too.