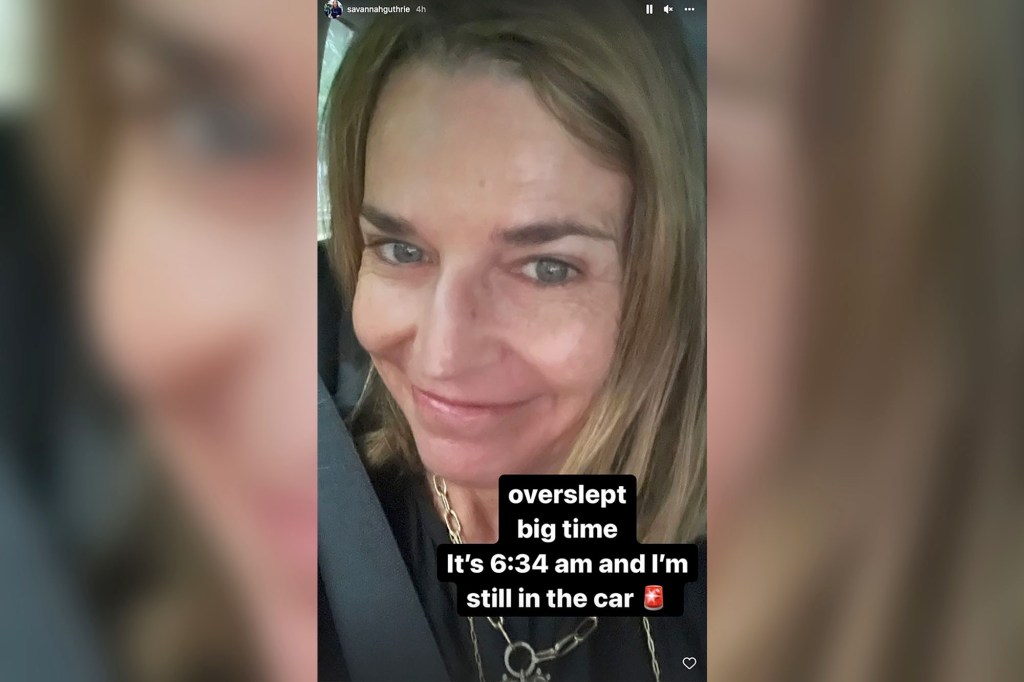 “Today Show” host Savannah Guthrie documented her frantic dash to work Thursday after she overslept and barely made it.

The 50-year-old morning show host took to Instagram to document her rush from her home to Studio 1-A, where the NBC morning show is filmed.

“Overslept big time,” wrote Guthrie in one of her stories.

Guthrie, however, managed to get to the studio with just 20 minutes to spare before she was scheduled to go on air.

Radio program director Holly Palmieri Schulz captured Guthrie speeding into her dressing room, exclaiming her relief that the host had made it in time for the broadcast.

Guthrie was then shown sitting with her hair and makeup team, Kelly O’Neill and Edmi De Jesús — noting it was 6:40 a.m. as the “miracle workers” made magic.

“This is a miracle,” joked Guthrie as she walked out to the set to join her fellow hosts.

During the show, co-host Craig Melvin — who was filling for Hoda Kotb amid rumors of a feud with her co-host — poked fun at Guthrie for being late and explained what happened to viewers.

“You almost had the morning off as well,” teased Melvin.

“Savannah Guthrie rolled in about 15 minutes ago. She overslept. She is normal.”

“15 minutes ago with no hair, no makeup. It was a terrifying sight,” said Guthrie. “But some miracle workers upstairs rolled me in and I’m very happy to be here.”

Guthrie’s morning from hell comes as the host is rumored to be feuding backstage with Kotb, with sources claiming to the Sun that they secretly “can’t stand each other.”

“Hoda out-maneuvered Savannah and got the spot,” the insider told the Sun.