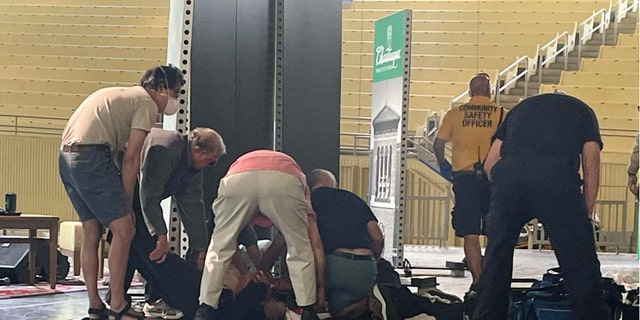 Indian-born author Salman Rushie was stabbed before a speech in Chautauqua, New York on Friday representing a stark reminder of the “fatwa” that was issued on his life by Iran’s late leader Ayatollah Ruhollah Khomeini.

Rushdie was stabbed in the neck before giving a speech at the Chautauqua Institution on Friday after living for over thirty years under the threat of an edict calling for his death issued by the Ayatollah Khomeini in response to his book “The Satanic Verses.”

Iran’s government has long since distanced itself from Khomeini’s decree, but anti-Rushdie sentiment lingered. In 2012, a semi-official Iranian religious foundation raised a bounty for Rushdie from $2.8 million to $3.3 million.

Rushdie dismissed that threat at the time, saying there was “no evidence” of people being interested in the reward.

That same year, Rushdie published a memoir, “Joseph Anton,” about the fatwa.

The 1988 “The Satanic Verses” publication was viewed as blasphemous by many Muslims. Often-violent protests against Rushdie erupted around the world, including a riot that ended in violence, killing six protesters.

Over the years, Rushdie has been an outspoken supporter of the freedom of expression and has endured death threats that at one time caused him to go into hiding with round-the-clock security.

Author Salman Rushdie, behind screen left, is tended to after he was attacked during a lecture on Friday, Aug. 12, at the Chautauqua Institution in Chautauqua, N.Y.
(AP/Joshua Goodman)

“It is free speech that makes it possible for us to be free people. Unfortunately, there are those who wish us not to be free, who would rather use the assassin’s veto to compel belief and silence dissent,” The Foundation for Individual Rights and Expression told Fox News Digital in a statement following the attack on Rushdie. “Mr. Rushdie has long understood free speech’s necessity. He is among its strongest advocates: “Free speech is the whole thing, the whole ball game.”

Rushdie’s attacker has not yet been identified and the status on his condition is not immediately clear but reports from the scene state that he was alive and breathing without needing CPR as he was airlifted to a nearby hospital.

Associated Press contributed to this report

Andrew Mark Miller is a writer at Fox News. Find him on Twitter @andymarkmiller and email tips to AndrewMark.Miller@Fox.com.