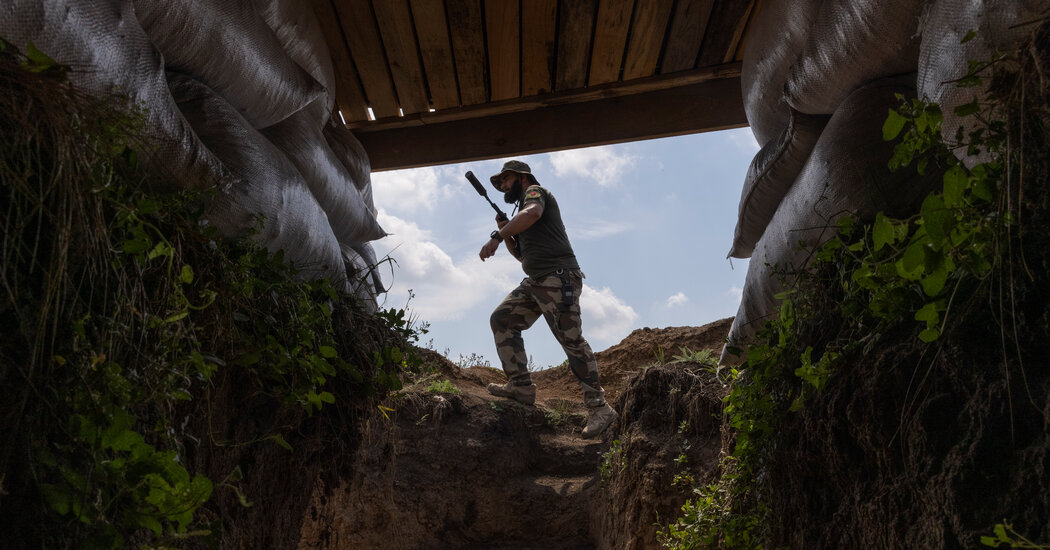 MYKOLAIV, Ukraine — The embattled city of Mykolaiv emerged on Monday from a 54-hour lockdown during which officers went door to door in search of collaborators who officials say are responsible for helping Russian forces identify targets for the rockets that pound the city daily.

The governor of the Mykolaiv region, Vitaliy Kim, declared the dramatic operation — which sealed the city, preventing residents from entering or leaving — a success. Five people were arrested, he said, and a number of weapons and communications devices confiscated, though he provided no details.

“I’m sorry for the discomfort over the weekend, but it was worth it,” Mr. Kim said in a video message Monday morning.

He added, “No Russian-speaking person was shot.”

The need to root out collaborators, according to Mr. Kim, has been particularly acute in Mykolaiv. Few places in Ukraine have experienced the kind of sustained barrage of Russian fire as this city on the southern coast. Since the war began nearly five and a half months ago, there have been barely two dozen days free of violence.

The attacks have destroyed about 1,200 homes and apartment buildings, according to the city’s mayor, Oleksandr Senkevych. Since the war began, he said, 132 residents have been killed and more than 619 injured in Russian attacks.

Amid the devastation, some residents said the checks for collaborators brought some comfort, despite the inconvenience.

“It calmed us down a bit,” said Valentina Hontarenko, 74, who was at a kiosk selling kvas, a popular drink made from fermented bread. “They asked about our connections to Russia. We don’t have any.”

During the lockdown, officers went door to door and stopped people in the street, checking their documents and scrolling through their phones looking for evidence that they might be coordinating with Russian forces. Video of the operation released by the local authorities shows officers checking computers and text messages on phones.

In one screenshot of a cellphone text exchange — whose authenticity could not be confirmed — someone with the screen name Mykolaiv People’s Republic describes an area of town as being full of military equipment and soldiers. The reply: “Send the coordinates.”

Mykolaiv is a largely Russian-speaking city with a prewar population of nearly 500,000. It borders the Kherson region, which is largely occupied by Russian forces. That region is now the site of daily skirmishes as Ukrainian forces wage a counteroffensive aimed at pushing the Russian troops eastward back over the Dnipro River. Part of Ukraine’s defensive lines run through the Mykolaiv region, and Ukrainian troops often come to the city on rotation or for a break from the front lines.

Though most Russian artillery cannot reach Mykolaiv, Russian forces have hit it with long-range rockets.

For weeks, Mr. Kim has warned of the threats posed by collaborators, citizens sympathetic to Russia who aid its military by providing information and Ukrainian troop locations. But he has released few details, and it is unclear how pernicious the problem is. Before this weekend’s lockdown, only a handful of people had been arrested on suspicion of aiding the enemy.

Last month, the immensely popular Mr. Kim posted a message to his roughly 677,000 followers on Telegram offering a $100 bounty for any information leading to the arrest of a collaborator.

“Help save Mykolaiv from rocket strikes,” he wrote.

The lockdown over the weekend was part of that effort.

Residents of Mykolaiv described the inspections by law enforcement as nonconfrontational, though they might make some civil libertarians in Western countries cringe.

“It wasn’t very comfortable,” said a 35-year-old woman named Yelena, who was standing in line with her husband to collect water from a truck. “They came and checked everything — passports, telephones. They looked at who lived where.”

She added: “What’s to fear if everything is in order?”

Russia will annex 4 regions of Ukraine on Friday: live updates

3 million children may miss a semester in flood-hit Pakistan