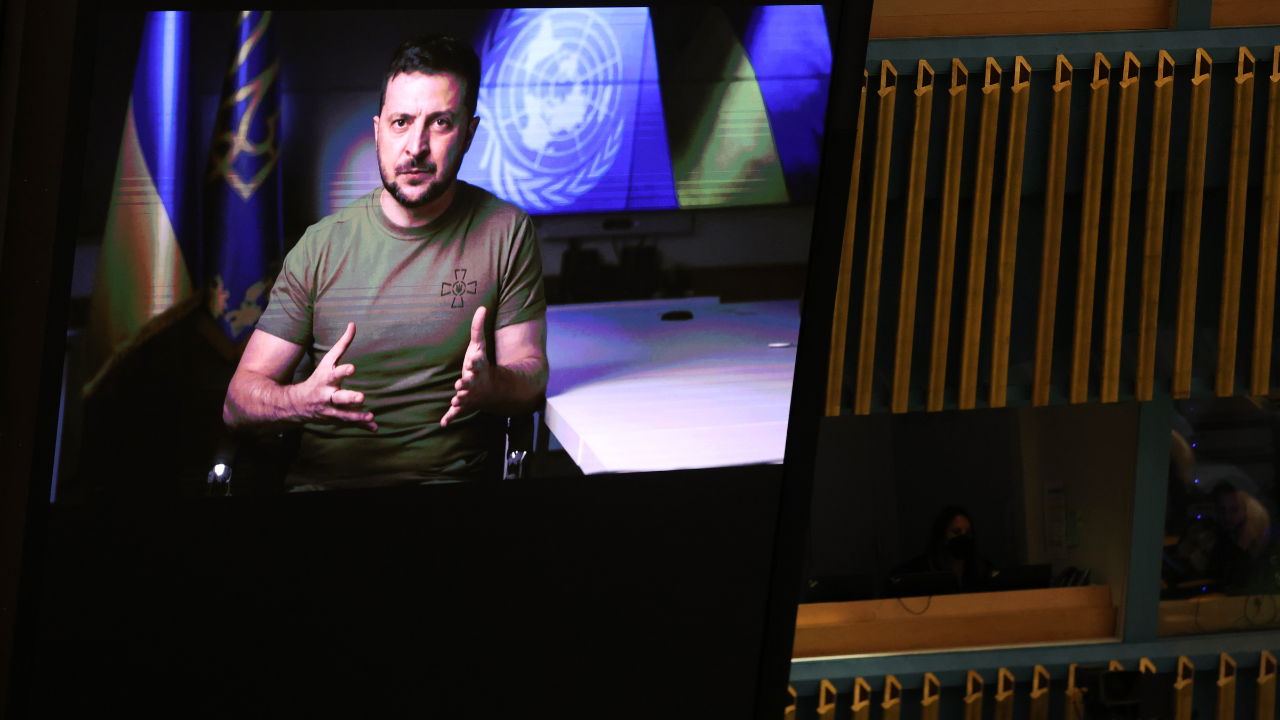 Ukrainian President Volodymyr Zelenskyy presented a “peace formula” on Wednesday that contains “just punishment” to Russian President Vladimir Putin and those responsible for crimes against Ukraine.

Zelenskyy made the speech on Wednesday during the U.N. General Assembly, which comes after Putin said that the Russian military will be conscripting reservist civilians and also made a nuclear threat to Western countries.

These are the following preconditions Zelenskyy gave for peace in Ukraine:

PUTIN WARNS WEST: THREAT TO RESORT TO NUCLEAR WEAPONS ‘NOT A BLUFF’

Ukrainian President Volodymyr Zelensky speaks to world leaders via a video link as they attend the 77th United Nations (UN) General Assembly which has returned in person this week for the first time in three years on September 21, 2022 in New York City. Over the course of the week leaders and diplomats will discuss the global food crisis, rising inflation and the ongoing conflict in Ukraine among other pressing world issues.
(Spencer Platt/Getty Images)

Zelenskyy said that “neutrality” is not part of the formula and said that Russia “wants war.”

“Those who speak of neutrality when human values and peace are under attack mean something else,” Zelenskyy said.

Part of the peace formula includes punishment for Russia’s invasion.

“Punishment for the crime of aggression. Punishment for violation of borders and territorial integrity. Punishment that must be in place until the internationally recognized border is restored,” Zelenskyy said.

His speech was met with a standing ovation by many of the delegations present at the U.N. General Assembly.

Delegates listen to a pre-recorded speech by Ukrainian President Volodymyr Zelensky during the 77th session of the United Nations General Assembly (UNGA) at U.N. headquarters on September 21, 2022, in New York City. After two years of holding the session virtually or in a hybrid format, 157 heads of state and representatives of government are expected to attend the General Assembly in person.
(Anna Moneymaker/Getty Images)

To those who allow themselves such statements regarding Russia, I want to remind you that our country also has various means of destruction, and for separate components and more modern than those of NATO countries, and when the territorial integrity of our country is threatened, to protect Russia and our people, we will certainly use all the means at our disposal,” Putin said. “It’s not a bluff.”

Russian President Vladimir Putin chairs a meeting on the situation in the oil and gas sector via videoconference at the Novo-Ogaryovo residence outside Moscow, Russia, Thursday, April 14, 2022.
(Mikhail Klimentyev, Sputnik, Kremlin Pool Photo via AP)

Russia also announced a partial mobilization of its military with reservist civilian conscripts being called up.

Putin says that the conscription is needed to “protect our homeland, its sovereignty and territorial integrity, to ensure the security of our people and people in the liberated territories.”

Reuters and Fox News’ Anders Hagstrom contributed to this report.

Adam Sabes is a writer for Fox News Digital. Story tips can be sent to Adam.Sabes@fox.com and on Twitter @asabes10.